ROOM AT THE INN 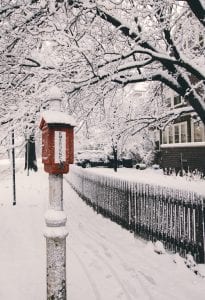 Christmas and the New Year festivities are over. But during this year’s holiday season I had an opportunity to learn Christ in a very special way. A week and a half before Christmas, we had a snowstorm. Snow covered everything on this Sunday morning and our pastors cancelled church. So we stayed home, hunkering down in our warm living room. It felt calm and peaceful. But the next thing which happened changed that.

Midway through the afternoon, the doorbell rang. ‘Who could that be on this snowy afternoon?’ I thought to myself. I got up, went to the door and checked to see who it was. A lady who used to go to a house church with us stood at the door shivering.  Opening the door to let her in, I noticed that her car was not in our driveway but stuck in a snowbank at the side of our yard.

She said that she had come by to ask us a question. But first, I wanted to see if I could find someone to help get her car out of the snowbank. My husband worked days that week’ so he couldn’t help. We called a few people that we both knew but no one answered their phones. So pulling on my boots and my coat, I headed out the door with her. We both walked up the hill to my neighbor’s house. Once at the door, I saw that someone had taped over the doorbell. I knocked loudly because I knew that their living room was at the back of the house. No one came. We waited for about 15 minutes before we trudged back through the snow to my house.

Back at the house, we called a few more people but to no avail. Then I asked her if she belonged to AAA. She did. We called them but they told us that they only assisted people whose car was stranded on the side on the road at this time. They considered her safe because she was at my house. They put her on the bottom of the priority list.

After we resolved that dilemma, the lady started talking about the problem which had brought her to my house in the first place. She needed a temporary place to live. She had a house but due to some difficult circumstances, she didn’t want to stay there overnight. It looked like she was not going to be able to go anywhere any time soon,so my husband and I told her that she could sleep on one of our sofas. There was nothing we could do anyways.  The next afternoon AAA pulled her car out of the snowbank and got it into our driveway. She still didn’t feel safe to go anywhere on the roads as they were very snow-covered. It was another two days before she felt that the roads were clear enough to get out.

In the meantime, the Lord spoke to me about someone else who knocked on a door, asking for shelter a long time ago–Mary and Joseph when they arrived in Bethlehem ( see Luke 2:7). What if this situation, which faced me, constituted a test or rather an opportunity which the Lord set up. God loves this woman as much as He loves me and she was in rather dire circumstances. She could have chosen to live in her car if we didn’t open our home to her. She was happy on the sofa and was willing to contribute to meals. We didn’t want to take rent from her. So we agreed to have her stay with us for a few weeks until she could find a different place. We did set up some guidelines to make it easier for all of us.

The situation tested us. And happily, after a month, she found another place to live. Jesus loves her. By giving her a place to spend the night, we ministered to Jesus as well as to her ( see Matt. 25:36). What an opportunity to give to Jesus during the season of the celebration of His birth.

Photo by Kelly Sikkema on Unsplash