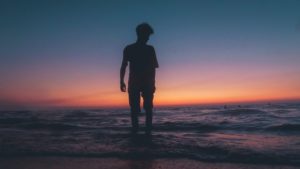 This year has been a difficult year for many people. What with the COVID-19 pandemic, lockdowns and all the extenuating circumstances related to it, many people feel anxious about the future. We cannot assemble or spend time with our friends in groups. Forced to spend time alone and away from crowds, people feel depressed and anxious. And here we are at Christmas which should be one of the happiest times of the year. If we gather together we may get the virus and bring it back to a family member who is vulnerable. Plus, uncertain times surround us with news around the world striking fear in our hearts.

But remember the Christmas story. the times which Mary and Joseph lived in were uncertain times as well. The Roman Empire ruled over the small country. The Romans commanded the people to go to the city of their birth and be taxed. Mary and Joseph were young and engaged. The young couple had much to be anxious about. Mary was pregnant with her first child, an unplanned pregnancy.

She was not afraid for an angel told her about this birth. In fact, one of the first things which the angel told her was to rejoice and to fear not. An angel had also appeared to Joseph and told him to not be afraid. Now, it is not an ordinary thing to have an angel come to you to announce the birth of a child. It is not ordinary at all to even see an angel. But this was no ordinary child. The child was born to bring man and God together, restoring the bond between them. He would be called the Son of the Highest because He was conceived by the Holy Spirit. No wonder the angel told both of them to fear not.

Fear could have overwhelmed the young couple. There were many unknowns in their future. They had to travel right before the birth of the child. They had no reservations for a place to stay once they arrived. Plus, people would probably talk about them for they were still not wed. But they had agreed with the plans of God once the angel had told them. They looked at the future with much anticipation. Mary had said to the angel, “Behold the maidservant of the Lord! Let it be according to your word.” (Luke 1:38). And Joseph had responded similarly, once the angel explained the matter to him.

Fear not! Those words hold so much power. And they have more power when spoken by a messenger sent by God.  We need these words today more than ever. Faced with the uncertainty of the virus and strange political times, no wonder we are afraid, But God still calls to us to not fear. We need not fear.

Maybe it would be easier for us not to fear if an angel came to us and gave us that message. Instead, we now have the Word of God to tell us the very same thing. The Bible mentions “fear not” over 365 times according to Lloyd Olgivie. That means one time for every day of the year. God assures us that He is with us wherever we go. Not only now but He promises to never leave us nor forsake us (Hebrews 13:5b).

We have the examples of many in the Bible like David and Joshua to not fear in the midst of trials. David said in Psalm 56:3 & 4, “Whenever I am afraid, I will trust in You. In God (I will praise His word), In God I have put my trust; I will not fear. What can flesh do to me?” David had every reason to fear for Saul wanted his life.  Afraid, he ran. Yet, he chose to trust in God in the midst of that.

We do not need to fear when God says He is with us. We may not be Mary or King David, but Jesus Christ promises He always will be with us. He carries us into the unknown. We can trust Him no matter what faces us especially when we abide in the shadow of God’s wing, as mentioned in Psalm 91. God has shown Himself faithful. Fear Not.